Not quite down for the count, but “Listen with Mother” (S6E7) packs an emotional wallop, not to mention a physical one for Louisa.

Viewers can revel in the scenes between mother Margaret and Aunt Ruth. They meet in an alleyway, reminiscent of “Gunfight at the OK Corral.” Ruth has Margaret in her sights and unloads both barrels. “I came back from London last night, and I thought I saw you,” Ruth says. “So I called Martin. He gave me the bad news.”

“He confirmed that it was you. He also told me my brother was dead.”

The women sit down at a café, and Ruth confronts Margaret about her emotionally abusive behavior raising Martin, especially when Margaret stopped sending her son to Joan’s, who loved him and wasn’t afraid to show it. Margaret claims it was because Joan was having an affair, but Ruth says: “You didn’t have a relationship with your son, and you didn’t want anyone else to have one.”

More important than the past, Ruth is concerned about the damage that Margaret can still inflict on Martin. Margaret responds: “I am Martin’s mother. I have every right to be here. You never had children. You can’t possibly understand what I’m talking about.”

The words might have had more effect had Margaret not walked off without James, who was in her care. “Don’t forget your grandson,” Ruth calls.

Kudos to Claire Bloom for playing the dreadful Margaret to the hilt.

When the Army comes looking for the AWOL Mike, he panics and determines to go on the run. Penhale provides a dash of comic relief, accidentally suspending himself by a hook in mid-air. Penhale surprises Al and Mike in his room. Mike is packing a duffel bag — a hard task when he has to fold the shorts perfectly. It turns out that Mike went AWOL because of his OCD. The “Doc” arrives and talks Mike into going back to the Army, which, the “Doc” says, has a “duty of care” and can treat Mike’s OCD.

“The state of your kitchen would have killed him.” 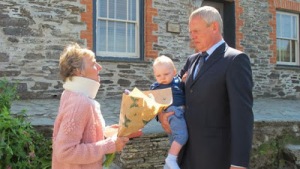 Mrs. Tishell comes to surgery with pain in her jaw. The “Doc” diagnoses angina, which saves her life, causing Mrs. Tishell’s old feelings for “Doc” to resurface.

These events swirl around the core theme – the deteriorating relationship between Martin and Louisa. At school sports day, Martin is so dysfunctional that he ruins the event, walking off stage in the middle of the ceremony. Louisa shouts and runs after him. She is hit, graphically and violently, by a car. 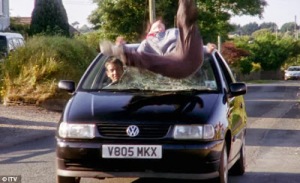 Fortunately, she suffers only a fractured collarbone.

At the hospital next day, Louisa is coughing. Martin suspects deep vein thrombosis, resulting from hospital neglect, and confronts her doctor, insisting he give her heparin and order a brain scan.

When Martin returns to take Louisa home, she tells him she is taking James to Spain.

“I’ll have my blood checked every week.”

“Every week? How long are you going for?

“Happy? Why does everyone have to be happy all the time?”

Why indeed? This episode is hard to rate. The acting is so good, it makes you feel so bad.