“Dead Handsome” takes place back in Series 2, with Danny Steel on the scene. I tried something new, in that I wrote the story from Martin’s point of view, which means I could get inside his head. Great fun.

The medical condition is based on that of a friend of mine. In spite of lifelong pain that puzzled doctors and was kept in check with penicillin, my friend had a witty sense of humor and a gift for colorful sayings, such as those quoted in the story.

(By the way, if you haven’t seen the 1998 film, “Shakespeare in Love,” which won seven Academy Awards, including Best Picture, catch it on DVD or streaming video. Along with a star-studded cast, Martin Clunes plays Richard Burbage, one of his better film roles.)

“Emergency, ‘Doc.’ Wanda Blanchett,” said Pauline, hanging up the telephone and handing Martin a patient file. “She says to bring plenty of penicillin and pain pills.”

Does she? Martin frowned at Pauline, wondering who the patient was and what she was suffering from. Before he headed out the door, however, he checked his bag for antibiotics and pain medication.

The Blanchetts’ two-story, stone house stood on a wide plot of neatly mowed grass. Martin rapped sharply at the door, and a youngster about six years old answered. He looked Martin up and down, turned his back and shouted, “Wanda, the doctor’s here!”

Another young voice from a room at the far end of the house, screamed, “Wanda, the beans’s burning!”

A madhouse, obviously. Martin walked toward the room with the burning beans. He reached the kitchen just as a girl with long, light brown hair, a bit older than the boy, let out another scream, “Wanda, the beans’s burning!”

“Why don’t you turn off the fire?” asked Martin.

“Can’t. Not allowed to touch the stove.”

“I see.” Martin walked over to the stove and turned off the burner. “There.”

She gave him a steady look and said, “Wanda Jean’s upstairs.” She crooked her finger and led him to a staircase in the back of the house. When they reached the bedroom, the girl said, “Doctor’s here, Wanda Jean.”

“’Bout time,” came the frail voice of a teenager lying on a double bed with an iron frame.

Swallowing his response, Martin opened his medical bag. He pulled out the stethoscope, put it around his neck and sat down on the edge of the bed. “Are you hurting anywhere?”

“My joints,” said the girl. “I’m too sick to die, ‘Doc.’ Don’t need an examination. Just give me the penicillin.”

“Where are your parents?”

“Work. Can you please hurry? Can’t you see I’m dying?” The girl crossed her hands on her chest and closed her eyes.

Great, a drama queen. Martin glanced around the room to find the two siblings seated on the floor by the door scowling at him. Martin bent over the girl and sighed. “If you don’t mind, I’ll examine you.”

Martin placed the scope on her chest. He bent closer. He had to listen hard to detect the faint heartbeat. He found his thermometer and discovered her temperature was one hundred three. Taking both her hands into his, Martin felt her swollen wrists.

“Stop fussin’ and give her the medicine,” said the girl by the door, and Martin could see the fear etched on her young face.

Martin took Wanda’s patient file out of his pocket. His eye ran down the first page, where Doctor Simms had listed the medicines and dosages he had administered.  This can’t be right. I’ve never given such a massive dose of penicillin to adults, let alone a child.

Looking at Wanda’s pale face, Martin closed his eyes. Simms, your treatment plan was unorthodox, but apparently it worked. I’ll follow it until we get past this crisis. Martin grabbed a bottle of pills from his case. He turned to the girl at the door. “Can you bring some water, please?” The girl nodded and left the room.

In a minute she was back carrying a small glass bottle of Coke. “Wanda Jean drinks Coke with her medicine.”

“Thank you.” Martin helped Wanda Jean to a sitting position. He slipped two tablets into her mouth and held the Coke bottle to her lips as she swallowed the pills; then he repeated the dose.

“I thought you was gonna let me die, ‘Doc,’” she whispered. “Gramma Blanchett was tickling my toes.”

“What time will your parents be home? I should call for an ambulance to take you to hospital.”

“You’re not fine. I’ll need to read through Doctor Simms’ notes to understand what’s wrong with you.”

“Doctor Simms said I have a mysterious illness, an infection that attacks my muscles. He worried it could attack my heart. He said my heart doesn’t beat with enough force.”

Martin jotted down a note in the file. “How bad is the pain?”

“I’ll leave pain tablets that you can take in an hour. Does anyone else in your family have the same symptoms?

“No.” Wanda pointed at the two children and said, “That’s Lucy, and we call the other one, Shorty. You two better get on your homework, or I’m gonna come downstairs and whomp you upside the head,” she told them in a voice that barely carried over to where the two were sitting.  Lucy and Shorty got up slowly, gave Martin a long stare and went down the stairs.

“So, you’re Doctor Ellingham. I been hearing about you,” said Wanda Jean, peering at him through lowered eyelids.

“I heard you kissed Miss Glasson and then told her she had bad breath.”

“Lucy. She’s a mini tape recorder. She was in Mrs. Tischell’s when Miss Glasson got on your case about mouthwash. Did you really say something that stupid?”

Try as he may, Martin could not hold back the smile playing at his lips.

Wanda Jean was quick to spot it. “When you first come in, all frowning and mean looking, I thought, someone’s whomped him with an ugly stick, but when you smile, ‘Doc,’ I can see that you are dead handsome.”

Martin cleared his throat. “Wanda Jean, tell me about your illness. How long have you been having these attacks?”

“I came down with rheumatic fever when I was five. The attacks started up four years ago, when I was ten. The only thing that works is penicillin, but the dose has to be higher each time. Doctor Simms was going to write me up in the medical journals,” Wanda announced with a lift of her shoulders.

“I see.” Martin looked at the girl. Her dark curly hair was matted about her face, her deep-set brown eyes crinkled at the corners, but it was her wide, generous mouth and strong bone structure that gave her face character. When she grows into her face, she’s going to be beautiful.

Wanda seemed to read his thoughts. “That’s Gramma Blanchett,” she said, pointing to a portrait on the tall dresser. “She was drop-dead gorgeous, and everyone says I look just like her.”

Martin looked over at the portrait and nodded, “Yes.”

Cocking her head to the side, Wanda said, “I hear Danny Steel’s back in town and courting Miss Glasson. Now that’s a pair to draw to.”

“You hear a lot for someone who spends so much time in bed.”

“You want me to go over there and punch his lights out, ‘Doc?’”

This time, Martin couldn’t hold back a chuckle before he said, “Perhaps we should wait until you’re strong enough to blow out a candle.”

“One monkey don’t stop no show, ‘Doc.’ If you’re sweet on Miss Glasson, don’t let Danny Steel muscle in on you.”

Martin glanced at his watch. “It’s five-fifteen. What time will your parents be home?”

Martin picked up the slim volume on the end table. “Shakespeare’s ‘Merchant of Venice.’”

“We’re supposed to memorize that passage about the ‘quality of mercy,’” said Wanda, “but I don’t get Shakespeare. He’s always writing about lovers who kill themselves. What tosh. Catch me killing myself over some dumb boy.”

“This play is different. It features a strong heroine.”

Martin opened the book to the “quality of mercy” scene. He started reading the passage, but soon he was reciting it by heart. As he spoke the words, Wanda’s eyes stayed glued on his face.

The quality of mercy is not strained;

It droppeth as the gentle rain from heaven

Upon the place beneath. It is twice blest;

When he finished the entire passage, Wanda spoke in a hushed voice. “I never heard Shakespeare sound so good, ‘Doc.’”

Martin set the book back on the stand. “Next time, you can recite it for me.”

He heard the front door open. A man’s voice floated up the stairs. “Who’s here?”

Racing footsteps sounded on the stairs, and a dark haired, handsome man appeared at the door, his wife right behind him. The man surveyed the scene, took a deep breath and said, “Wanda Jean, you slacking off on your chores again?”

“Daddy, Doctor Ellingham here give me the penicillin – finally. I’ll be up soon.”

Rising, Martin turned to the man and woman. “Your daughter is very ill. She should stay in bed a couple days.”

Mrs. Blanchett walked over to Wanda and put a hand on her forehead. “Child, you’ll do anything to stay home from school.” She turned to Martin, “Thank you for coming, Doctor Ellingham. We’ll look after Wanda Jean now.”

“Wanda Jean should be checked out at hospital, Mrs. Blanchett.”

“No hospital. Tell him, Mommy.” Mrs. Blanchett looked at Martin and shrugged.

“But–,” he stopped, realizing the uselessness of arguing. “Stay in bed. Take three of these antibiotics four times a day.” He reached into his bag and pulled out another bottle. “Here are pain pills to take as needed.”

Martin glanced at the parents and said to Wanda, “I’ll come back tomorrow. I want to get to the bottom of your mysterious illness. You have some symptoms consistent with fibromyalgia. I’ll need to do more research and check into the latest treatments.”

Wanda beckoned Martin to lean toward her, and she winked. “Remember what I said about Miss Glasson, ‘Doc.’ Go for it. Bet ’em high and sleep in the streets.”

“Study Shakespeare, Wanda Jean.” He straightened up and looked down at the young patient, “although, I dare say, our Will could have picked up pointers from you.”

Back in the village, Martin went into the greengrocer’s for vegetables. As he stepped outside, he met Louisa and  Danny Steel walking arm in arm. “Martin, how is Wanda Jean?” asked Louisa, shaking her arm loose from Danny. 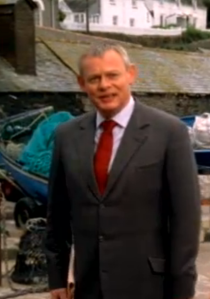 Martin shook his head. Maybe I will ask Wanda Jean to punch his lights out.  A grin crossed his face, and he caught the surprised look in Louisa’s eyes.

Martin raised his chin, turned and strode down the path. Ah, yes, you called it, Wanda Jean. Dead handsome.

(All “Doc Martin” articles and FanFiction can be found on the front page of karengilleland.wordpress.com, and FanFiction is also collected under the “FanFiction Short Stories” Tab.)

Tina on May 7, 2014 at 2:29 pm said: Edit
Bless your heart and your golden pen, Karen. Thank you very much for giving us fans these funny, poignant, sweet and very creative stories about our favorite Doc. Please keep them coming, it is a long wait for Season 7.