This story is a bit different because I have pulled a real person, Margaret Coel, award-winning author, into the fiction. All the anecdotes are true.

“Martin,” said Louisa, as she was feeding James, “Professor Harris, who teaches the correspondence course in novels that I’m taking, emailed that Margaret Coel is coming to Portwenn!”

“An American mystery writer. Her novels feature the Arapaho Indians on the Wind River Reservation. Professor Harris has arranged a ‘One Book, One Village’ event.”

“Do you think people in Portwenn have ever read one book?”

“Don’t scoff. The program is popular in America. A town selects a book and asks everyone to read it. Then the author comes to speak and sign books.”

“Hmm.” Leave it to the Americans to find ways to sell more books, he thought as he walked into the surgery.

A week later, Martin returned from a meeting in Exeter to find Louisa in the kitchen preparing dinner. The door was open, and a soft breeze played at the tablecloth. Martin picked up James from his high chair and leaned against the sink, noting the candles and flowers on the table. “What’s all this?”

“Professor Harris’ mother in Truro fell and broke her leg, which means the professor can’t act as host for Margaret Coel — you remember, the American mystery writer. Ruth has stepped in, and luckily for us, they’re coming to dinner.”

“Louisa, the last thing I want to do is have dinner with an American mystery writer.”

Ruth’s arched voice sounded in the open doorway. “We’re here, thank you, Martin. I’m sure Margaret is delighted by your warm welcome.”

A very tall, dark-haired woman, wearing a tan leather jacket and jeans, walked into the 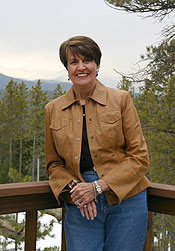 kitchen. Ruth made the introductions, and Martin’s face burned under Margaret’s dazzling smile.

“I’m sorry to intrude,” Margaret began, but Louisa cut her off.

“Believe me, we are honored to have you. I’ve read Night of the White Buffalo, and I’m looking forward to your talk. Martin is the GP in Portwenn, so he doesn’t often have a chance to read for pleasure.”

And if I did, it wouldn’t be mysteries about cowboys and Indians, he thought, as he put James back into the high chair and joined the women at the table.

“Along with her award-winning novels,” said Ruth, as if sensing his thoughts, “one of Margaret’s nonfiction books is credited with ending a hundred years of debate among Plains Indian scholars.”

“Please tell us about it,” said Louisa.

“You’re taking me back many years,” Margaret said and sat thoughtful for a minute. Then she began, “I had become intrigued by an Arapaho chief named Left Hand, described as tall, intelligent and, by most women, extremely handsome.”

She smiled and continued. “I was fascinated by the fact that, out on the plains, in the mid-eighteen hundreds, Chief Left Hand spoke English.”

“Quite an accomplishment,” said Ruth.

“I immersed myself, as well as my husband and children, in research. Using old maps, we trudged through the remnants of Arapaho villages. The past was coming alive to me.”

Taking a sip of water, Margaret looked around the table before resuming. “It was a time in history when the Indians were being squeezed out of their lands. The territorial governor ordered the Cheyenne and Arapaho Chiefs to take their people to safety at a desolate place called Sand Creek, or, as the Indians called it, the ‘no-water land.’”

Again Margaret paused. “On November 29, 1864, as hundreds of families slept and most of the warriors were away hunting, Colonel John Chivington led his mounted troops into the camp. The soldiers brutally murdered one-hundred-sixty Indians, mostly women and children. They even shot those attempting to surrender.”

“The naked wounded fled northward, in bitter cold, to reach a Sioux camp forty miles away,” said Margaret. “When the survivors told of the horrors they had witnessed, even fierce Sioux warriors wept.”

Martin looked at Louisa, who was dabbing at her eyes with her napkin.

“Have you been to Sand Creek,” asked Ruth

“Yes, my family and I walked along that creek bed. I felt overcome by the sense of a tremendous force crashing behind us. I yelled, ‘Run!’ and started running myself.

“The kids were scared and called out, ‘What’s wrong, Mom?’

“I just yelled to keep running. I had an overpowering feeling of being chased, as though the soldiers were attacking, as they had in 1864.”

She stopped speaking, and only the caw of the seagulls broke the silence.

After a few moments, Margaret continued. “After the Sand Creek Massacre, no one knew the fate of Chief Left Hand. Another chief named Left Hand appeared in Oklahoma. Many believed he was the same man, but scholars were divided on the question. I had spent four years documenting Chief Left Hand’s world, but I couldn’t write the book because I didn’t know the ending.”

“How did you learn the truth,” asked Louisa.

“A trader named George Bent had been wounded at Sand Creek, and I had read the book about him. I went back to the Denver Public Library and asked to see the original typescript of that book,” she said, looking at Martin.

“As I thumbed through pages, two folded letters, written by George Bent himself, slipped out. In answer to a friend’s questions, he wrote that Chief Left Hand had been wounded at Sand Creek. He’d made it to the Sioux camp, but then died. The letters had been misfiled for a hundred years.”

The listeners remained silent. Even James Henry had stopped gurgling, seemingly captivated by the story.

“I was pleased to learn the truth, but also very sad, because I had grown so close to this

man. My book, Chief Left Hand, was published in 1981, but my quest wasn’t over,” said Margaret. “I wanted to find the place where Left Hand was buried.

“One August day, my husband and I set out for Cheyenne Wells, in Colorado. We drove along a ranch road until it ran out, and we started walking. We noticed an owl, in daylight, hopping along behind us. Whenever we stopped to eat or drink, the owl watched us. ‘Strange,’ we thought.”

“We saw nothing but blue sky and brown earth. Then we topped a bluff and caught our breath. Stretching out before us was a field, radiant with wildflowers of every color. We looked around. The owl was gone. We knew we had found Chief Left Hand’s burial ground.”

Margaret paused, eyes lowered, “I told the story to a group of Arapaho elders, and they were totally silent. According to Arapaho belief, if a dead person chooses to return, that person will come in the form of an owl.”

Martin cleared his throat, stood and picked up James Henry, who had begun to fuss now that Margaret had stopped speaking.

The women stood up also, and Louisa walked over and gave Margaret a hug. “We’re all touched by what you’ve told us,” she said. “I look forward to hearing more at the center.” She glanced at her watch, “We’d better hurry.”

“Are you coming, Martin?” asked Ruth.

“I promised Louisa I’d look after James.” I’m sorry because I would like to hear more, he thought.

After the women left, Martin cleared the kitchen and took James into the living room. Martin sat down with a magazine, strumming his fingers on the sofa. James seemed to pick up on his restlessness and began fussing. “Come on, James, let’s take a walk.”

The night air was warm, and the full moon lit up the path as Martin wheeled James down to the community center. A little ways from the open door, Martin lifted James out of the stroller and held him in his arms. “Your mother will be out soon. We’ll walk back with her.”

“You’re right, and I wanted to see one myself. I was told where to look, so my husband and I hiked up a mountain near the reservation. After several hours, we came up empty and were about to leave.”

She paused, as though visualizing the moment. “I stopped, closed my eyes and said, ‘If you want me to see you, please show yourself because I can’t find you.’ I opened my eyes and there it was – right in front of me. In plain sight!”

When the applause drew to a close, Ruth announced that the program was concluded. Martin stepped aside as the crowd trickled out.

“Martin,” said Louisa, “what a nice surprise,” and she walked over, gave James a kiss, and linked arms with Martin.

“Your talk was a hit, judging from the comments,” Martin said to Margaret, as she came up to them.

She looked at Martin and said, “The morning I left home, I spotted an eagle circling the house. Not unusual in Boulder, but this one caught my attention. The Arapahos claim that eagles are messengers of the gods. My eye fell upon my first novel, The Eagle Catcher. Something compelled me to put it into my bag.”

Digging into her large leather satchel, Margaret pulled out a book. “I glanced out from the stage and saw your face in the moonlight. I think I was meant to give the book to you. You have the presence of an Arapaho warrior, tall, handsome, honorable.”

Martin took a deep breath and said, “I’m sorry I was rude earlier. I thought your trip to Portwenn was a ploy to sell books.” He paused, looking into Margaret’s eyes. “I couldn’t have been more wrong. I found your conversation at dinner very interesting.”

Louisa squeezed his arm, and James began wriggling. Martin looked at the two of them and shivered, overcome with a sense of love and family.

“Noto’uho’,” Margaret smiled. “‘My friends,’ perhaps one day you will visit Boulder. The city, at the foot of the Rocky Mountains, was the favorite camping ground of the Arapahos, who loved the beauty of the place.”

“I’m not much of a world traveler,” said Martin, glancing at Louisa and James.

“I understand,” said Margaret, gesturing to the three of them. “You have the world right here in your arms.”